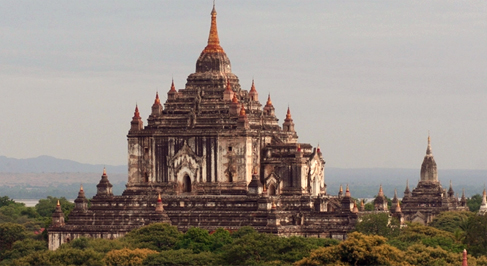 One of the most remarkable sights in South East Asia, the magic of Bagan has inspired visitors to Myanmar for nearly 1000 years. The kingdom of Bagan has existed since the 8th century, but it only rose to glory as capital of the First Kingdom of Myanmar in the early 11th Century. Ancient chronicles state that there were once 4446 temples over its wide plains but today only 2230 remain, as recorded by UNESCO in 1988. King Anawrahta who ruled from 1044 to 1077 initiated the building of the temples on this vast plain. His kingdom lasted until the late 13th century when during the rule of a weak king, Bagan fell to Kublai Khan’s armies, in a battle that was described at length in Marco Polo’s Travels. Many of the temples were architectural wonders of their time.

There is hardly a trace of cement in the fine masonry work. The massive roofs were held up by clever use of Voussoired arches and barrel vaults. The windows were arranged so as to throw rays of the sun directly onto the faces of massive Buddha images within the vaulted chambers. Today Bagan offers luxurious riverside accommodations, where after a hard day’s temple watching visitors can relax with a few sundowners to watch the Ayeyarwaddy River flow by.

For a more intimate taste of local life, there are clean family-run inns and guesthouses. For an unrivalled view of Bagan, hot air balloons take a lucky few over this ancient kingdom in the soft light at dawn and dusk. For the more energetic, a round of golf is possible with the temples providing a magnificent backdrop. Bagan is also famous as the centre of Myanmar’s thriving lacquer ware industry. Today tourists can watch the skilled artisans at work as they work on the various stages over a period of six months. Much of this lacquer ware is destined for the boutiques of Yangon, and from there to the world markets, where in recent years it has started to make a considerable impact.