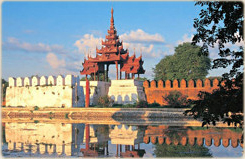 Mandalay still evokes images of a romantic bygone era. The royal palace and its impressive moat sits at the foot of the imposing Mandalay Hill. Positioned on the banks of the Ayeryarwaddy River, Mandalay is the principal cultural and economic city of Upper Myanmar. It lies within easy striking distance of former colonial hill stations, ancient cities and other cultural attractions. As the last seat of the Myanmar kings, Mandalay left a bittersweet legacy to the people. King Mindon of the Konbaung Dynasty who reigned from 1853 to 1878 created this capital out of the wild woodlands at the foot of Mandalay Hill. Mindon as a deeply religious monarch made Mandalay and her neighbouring town Sagaing important centres of Buddhism, with many great pagodas and hundreds of beautiful monasteries and nunneries, in both colonial and vernacular architecture. 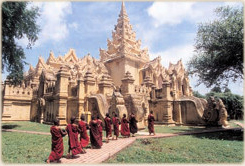 Some of the most notable attractions include Buddhist scriptures carved on 729 marble tablets in the Kuthodaw Pagoda as the ‘biggest book’ in the world. One pretty legacy of Mindon is the all-teak carved pavilion he lived in before his death. Once completely gilded inside and out, only the interior gold remains undamaged. The rest of his palace was destroyed in World War II and a replica was built on the site. Nearby Amarapura was once the seat of kings, but now the best craftsmen of Myanmar work there in embroidering tapestries, casting bronze or carving teak. A unique feature of Amarapura is the wooden footbridge about 1.2 km long, spanning Taungthaman Lake to reach the Kyawt Taw Gyi Pagoda on the opposite bank, which has intriguing wall paintings showing the life of the early 19th century villagers. Inwa was another capital city and all that remains now is lush, green farmland and cosy villages nestled behind the old city walls, a lovely little oasis in the dry dusty plains of the region.