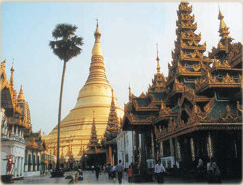 The garden city of Yangon, the cosmopolitan capital city of Myanmar, still maintains its colonial charm with wide tree lined avenues, tranquil lakes, and gracious turn of the century architecture. Home to one of the ancient wonders of the world, Shwedagon Pagoda a 98 metres high golden stupa rises majestically over the city like a beacon of glory. The greenery of the city makes an enchanting backdrop to the beautiful shrine. Believed to have been built 2500 years ago the Shwedagon was enshrined with hair relics of the Buddha. Century by century king and commoner alike added their symbols of gratitude to the Buddha in the gold and jewel donated to the stupa and the umbrella at its apex, which is decorated with over 80,000 pieces of jewellery and topped with an orb paved with diamonds. The glory of the Shwedagon is however not in its material wealth but rather in the one hundred pavilions and shrines of traditional architecture clustered on its platform and the reverence of the devotees.

Here, you see into the heart of the people as they pray and offer flowers, incense and candles. Once Yangon was a small town called Dagon, on the suburbs of an ancient kingdom of Okkalapa. In 1755 the founder of the Third Myanmar Empire King Alaungpaya who reigned from Upper Myanmar conquered the southern parts of the country and renamed the town “Yangon,” meaning End of Strife. After the British colonised the southern regions they made it into a bustling port. The British have long since departed, but left a legacy of beautiful colonial style architecture, often charmingly incorporated with Myanmar motifs. As befits any capital city Yangon offers a whole range of sites and experiences. From elegant continental dining to Japanese, Korean, Thai and of course Myanmar cuisine. 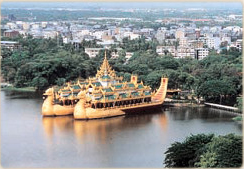 The National Museum gives an insight into the décor of kings’ palaces; the Gem Museum displays uncut rubies as large as bricks. Then there is the hustle and bustle of the morning markets selling piles of luscious vegetables and fresh fish. The best of oriental bazaars is the Bo Gyoke Aung San Market with its hundreds of tiny stalls selling everything from rubies to lacquer ware to silks. A short drive out of Yangon takes you to a different world of sleepy villages largely untouched by modern day life. Thanlyin (Syriam) and Kyauktan, are typical small towns with gently rolling landscape, old monasteries and pagodas hidden in leafy glades. The annual festival at Kyaik Khaut Pagoda of Thanlyin is one of the major country fairs of the region.

Nearby Twantay, is famed for its pottery works where ancient techniques are still used. Further afield is Bago, once named Hanthawaddy and the capital city of Mon kingdom. The Shwe Mawdaw Pagoda here is a majestic stupa and its annual festival in April is one of the biggest in Lower Myanmar. The huge reclining image of Shwe Thar Lyaung was once lost to the jungle and only in the 19th century discovered by engineers repairing a road. The people joyfully reclaimed this beautiful image and it is now one of the most famous religious sites in Myanmar.